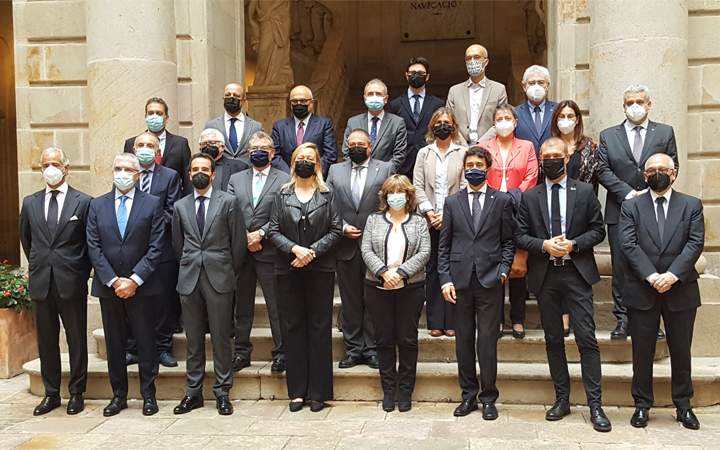 The ports of Barcelona and Tarragona will participate, with 10 percent and 5 percent respectively, in the shareholding of the Monzón Intermodal Terminal (TIM). The SAMCA Group, founder and promoter of the terminal, continues to hold the majority of the company’s capital with 75 percent. The shareholding is completed with LogiRAIL, of the Renfe group, which owns the remaining 10 percent.

The signing of the incorporation of both ports to the company’s share capital took place at the Casa Llotja facilities in Barcelona, ​​in a ceremony chaired by the Minister of Economy, Planning and Employment of the Government of Aragon, Marta Gastón, and by the General Director of Transport and Mobility of the Generalitat de Catalunya, Mercé Rius.

At the closing ceremony, Marta Gastón highlighted the importance of TIM Monzón and conveyed, on behalf of the Government of Aragon, “recognition, gratitude and encouragement so that we all continue to contribute in this line.”

Future vision
In this sense, he has defined the terminal as “a solid and consolidated project with a vision for the future for the development of the Aragonese economy” and has stressed that “logistics is more than a sector, it is a wealth of opportunities for economic development “. “Adding wills and joining collaborations allows the journey to be unstoppable,” he pointed out, ensuring that “the Executive’s commitment is firm.”

The Minister of Economy, Planning and Employment has highlighted the structuring nature of the TIM, a project that allows “the Monzón environment to have an authentic capacity for development”.

“We need projects like this one that, from public-private collaboration, allow us not only to have a tool against depopulation, but also a real lever for development. We continue to believe in the sum to achieve a better result,” he stressed. All this framed in the firm commitment of the Aragonese Executive to promote intermodality within its logistics strategy, with the rail highway as the star project.

Gastón conveyed his gratitude to the four signatories, but especially to the SAMCA group, “one of the best assets in the Autonomous Community”, of whom he highlighted its “diversification and commitment to the Aragonese territory”, in addition to its “deployment of economic activities and the entrepreneurial talent of its human team” as a great asset.

Continuing with her gratitude, the counselor has ensured that for Aragon “having two ports of reference as an outlet to the sea – Barcelona and Tarragona – is a real luxury” and has opted to “strengthen those ties and that sum day by day with additional projects “. He also highlighted the role of Renfe, which “enables projects to be carried out efficiently and with guarantees”.

International growth
In addition to consolidating TIM’s business, this operation is of great importance because it provides the project with the commercial vision and international growth opportunities represented by two reference ports in Spain, such as Barcelona and Tarragona, which are at the forefront of maritime traffic. of merchandise in the country, in the first case, and they have a clear specialization as regards agri-food bulks, in the second.

The incorporation of the Port of Barcelona is key to increasing TIM’s business possibilities, because it will promote, among other things, the meat exports of its reefer container division – with controlled atmosphere – “thermoTIM”, but also because it will entail the expansion of the road de Selgua at 750 meters in length, since this is one of the railway sidings in which the aforementioned port authority will invest in the coming months.

The link with the port of Tarragona will in turn reinforce the activity of the terminal for agri-food bulk “agroTIM”, the Government of Aragon has indicated in a press release.

Intermodal platform
TIM is a business initiative promoted by the SAMCA Group in 2007 that began its activity in August 2011 and in which public, railway and maritime companies of the Spanish logistics sector also participate. The platform accumulates an investment of 20 million euros since its creation.

Renfe – LogiRAIL provides TIM with the design of a business model for the company based on a logistics solution for the transport of goods by rail, which would solve the supply needs of the SAMCA plant in Barbastro and those for the export of alfalfa.

TIM, which broke its activity record in 2020 moving 1,100 trains and almost 50,000 containers, offers a comprehensive service supported by the latest technology and introduces clear competitive advantages in freight logistics, such as a privileged geostrategic position and excellent routes. of communication, the reduction of environmental pollution and the control of the increasing costs of transport, adding value and sustainability to the supply chain of its customers.

In addition to being the only railway terminal in the national territory that brings together three different activities: dry container -TIM-, reefer container -termoTIM- and bulk merchandise -agroTIM-, the Monzón Intermodal Terminal has great growth potential and it has been officially recognized as a sustainable project that contributes to the fight against climate change: its operation can prevent the circulation of 25,000 trucks per year and the emission of more than 5,000 tons of CO2 per year into the atmosphere.

TIM faces its 10th anniversary with numerous projects on the horizon. Among them, the most important is the forthcoming concession for the container terminal at the Tamarite de Litera station (Huesca) for which it was bidding along with other major international operators.

The initiative will consist of the construction and management of the infrastructure for the next 15 years, so that they will be complementary facilities to those it already has in Monzón.

The Range: Lust after this Valentine’s/Galentine’s gift guide

6 Reasons Why You Should Buy Eye Shadow Packaging Boxes