HomeNewsINTUR Tourism Fair returns after the pandemic with a more professional 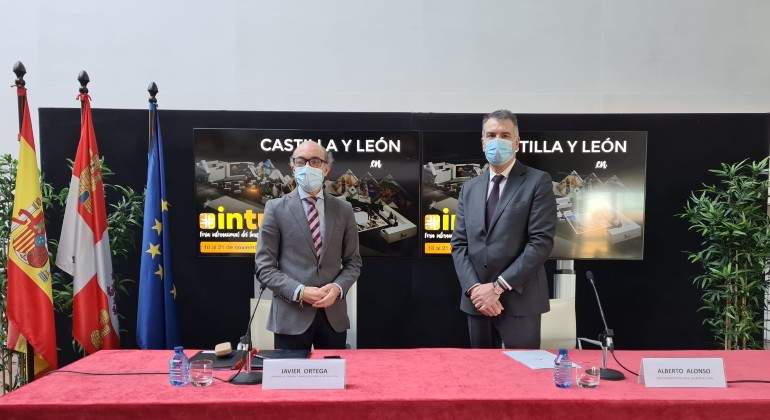 The International Indoor Tourism Fair (INTUR), which will be held in Valladolid from November 18 to 21, will present a new format in which it will promote the professional and commercial aspect, which will differentiate from the one that presents the offer to visitors, which they will be able to know a thousand destinations.

In this 24th edition, which is recovering after the stoppage due to the pandemic, the Board will bet on experiential and specialized tourism in a contest in which ‘INTUR Negocios’ is promoted, the most professional and commercial aspect of the fair, with new meetings such as ‘INTUR B2B’, ‘INTUR Mice’ for congress tourism and ‘INTUR Plus’, as a meeting point for professionals in the sector.

The Minister of Culture and Tourism, Javier Ortega, accompanied by the director of the Valladolid Fair, Alberto Alonso, and the general director of Bocuse D’Or Spain, David Basilio, have presented the contest and the participation of the Board in this edition.

The event is a benchmark in the sector on the Peninsula , also with Portugal, which has an important presence, and will have as an international guest destination the French department of La Vienne, with representation from the capital, Poitiers, and the Futuroscope theme park, poles of tourist attraction of the region.

The fair presents a new format to adapt to the “trends” of the market and the demands of exhibitors and professionals in the sector, after a few months complicated by the pandemic, in which tourism has been one of the most affected sectors, explained Ortega .

In this regard, the general director of the Valladolid Fair, has indicated that from the entity it would be “reasonable” for the number of visits this year to drop by 35 percent, as has been the case with other contests since the activity after the pandemic.

In this sense, there will be a professional conference on November 18, under the name of ‘INTUR Business’ and three days in ‘INTUR Viajeros’, where visitors can obtain information on the main tourist destinations, as well as enjoy all the activities offered in the contest.

Events (edit)
Ortega explained that the Board is committed to promoting experiential tourism, new tourism products and food and wine tourism in the Community, supporting the celebration of outstanding events such as the Spanish Cooking and Pastry Championship and the selection of the candidate Bocuse d ‘ Or 2021 ‘, in collaboration with the Asociación Maestres de Cocina de Castilla y León.

Likewise, it will be the setting for the designation of the Spanish Capital of Gastronomy 2022, which was traditionally held at FITUR and which, on this occasion, will be held at INTUR, an option chosen by its organizers.

In this framework, the celebration of the Spanish Cooking Championship will allow to know the latest culinary trends at the national level and will have the participation of the representatives of the autonomous communities, among which the chef representing Spain will be selected in the next edition of Bocuse D’Or, as well as the winner of the 2021 Spanish Pastry Championship.

For this, INTUR will develop nine hours of live cooking, with the participation of ten teams of cooks and five of pastry chefs on the 19th and 20th in Hall 2 of the Fair.

In the commercial and professional field and within the framework of ‘INTUR Business’, the Ministry will play an important role in the development of ‘INTUR B2B’, which will be held on Thursday 18, with the aim of increasing business opportunities for entrepreneurs of the tourist sector of the Community.

For this, the participation of around 50 confirmed national and international operators is expected and it is expected to exceed 200 companies selling tourism products participating in the professional meeting, of which approximately 70 percent will be from the Community.

The Ministry is also committed to specialization through ‘INTUR Mice’, a commercial space focused on business and incentive tourism, in which the participation of 15 national exhibitors is expected, as a strategic sector that contributes to seasonal adjustment and diversification of the offer.

In addition, it will participate in ‘INTUR Plus’, as an advisory space for professionals in the sector, with the aim of continuing to inform about new initiatives and platforms launched by the Ministry in recent months such as the’ Tourism Seal of Confianza ‘, associated with quality and excellence in tourism post-covid; the ‘Sufragium’ platform as a new information and contact system between the employer and the administration; and the ‘Tourist Bonus’, as an outstanding tool for use to encourage the tourist flow during the winter and spring of next year, until May 31.

Intur Travelers
On the other hand, from November 19 to 21, the fair will be open to the visiting public, who will be able to access the entire national and international tourist offer, which will comprise 1,000 destinations.

The stand will have different work and promotional spaces, as well as a stage dedicated to the presentations of new tourism products and a new space configured as an experiential tourism promotion area.

Among the most outstanding tourist products in this edition is the promotion of the 15 Roads to Santiago through Castilla y León, which will have an important role after the extension of the Jacobean Year in 2022.

Holy Week will also be promoted as a sign of identity of the Community, with a national leadership in the number of recognitions of tourist interest, and the tourist offer related to World Heritage, the great regional tourist routes and enogastronomy, together with the rural and nature tourism, with the presentation of the new brochures on trails and natural spaces in Castilla y León.

Within the space dedicated to experiential tourism, international tourism projects and products will be announced, such as the ‘Euroveo1’ cycling route, the ‘Napoctep’ project, the ‘Posadas Reales’ rural tourism quality brand, and active tourism in Castilla y León , historical recreations, as well as specialized tourist products such as wine tourism, mycotourism or ecotourism, with an outstanding offer in the Community.

A new space that will have the active participation of the attending public, through a program of activities, workshops and presentations that will help to understand the tourist offer in a more relaxed way.

As a complement, in collaboration with the Diputación de Ávila, the Ministry will install a planetarium in the courtyard of the fair to publicize the offer of astrotourism in the Community, as a new and sustainable tourism product, with growing demand, which also It contributes to the tourist seasonality.