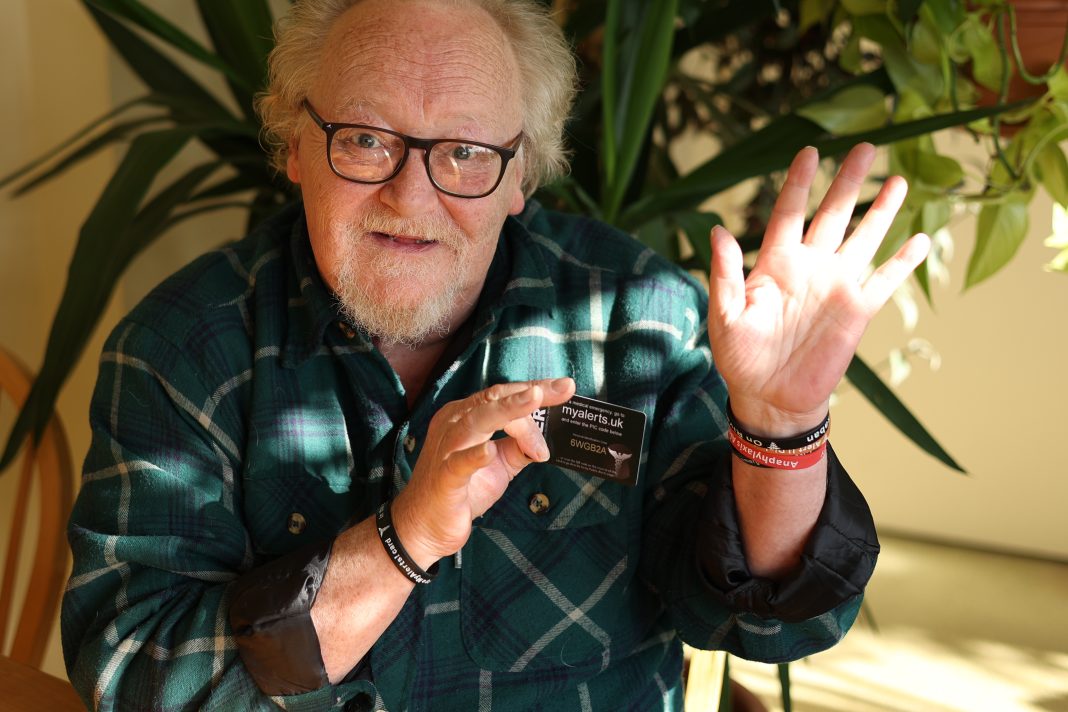 A NEW medical alerts solution which gives first responders instant access to potentially life-saving information about a patient’s conditions and medications while removing the need for them to wear multiple wristbands has been launched.

MyAlerts! features a silicone wristband that directs first responders and EMTs, who are trained to look for medical jewellery, to a card carried by the patient and printed with a unique QR code and Personal Identification Code (PIC) number.

They can either scan the QR code or type the PIC number into the MyAlerts! website to instantly gain access to details about a patient’s health and current medications without the need for an app.

If a first responder cannot access the internet, they can call a number on the card and an operator will relay the information, which the owner can update as often as they wish.

MyAlerts! is the brainchild of Brodie Fry, a former darling of 1980s TV, who eventually got fed up with wearing four bands for a variety of health conditions he suffers from, including diabetes and a circulatory disorder.

Brodie, who became a household name with his eccentric comedic routines on shows such as Bob Says Opportunity Knocks, said: “When I was told I should wear a fifth band, I knew that enough was enough.

“I was wearing two bands on each wrist otherwise they tangle with one another and catch on clothing. I was also concerned that a first responder would check one arm and, finding two, would not look for any others.

“The problem with the medical alert bands on the market is that they are generic and each only alerts to one specific condition or medication.”

Brodie initially typed up details of his medications and conditions and printed them on a sheet of paper that he kept folded in his mobile phone case. Each time any of the details changed he edited the sheet and replaced it.

He soon realised this wasn’t a practical solution either, and it was while working from home in 2020 as a web developer that he had a eureka moment and realised all the information could be stored online and accessed via a quick link from a MyAlerts! wristband.

He continued: “I realised there had to be another way. This is when I came up with MyAlerts! – a single, scannable card that leads to a page of information about the wearer’s health conditions and medications.”

The products currently available on the market only cover a single condition meaning people with multiple illnesses are forced to either wear a band for each condition or run the risk of an EMT missing a health complication or details of medication that could be potentially fatal.

After an overwhelming positive response from friends and acquaintances who tried MyAlerts!, which costs just a penny a day, Brodie has now devoted himself full-time to developing the product.

He continued: “Being no ‘spring chicken’, I suffer from several health conditions, ominously referred to in these pandemic times as co-morbidities!

“During lockdown my physical and mental wellbeing deteriorated and this partly expressed itself in Agoraphobia.

“At the age of 65, with Type 2 Diabetes and a circulatory disorder requiring constant treatment with anti-coagulants, I became increasingly aware that, should I suffer a medical emergency, a first responder would need access to this crucial information.”

The data stored on a person’s MyAlerts! page is completely anonymous – as MyAlerts! doesn’t need to ask for your name, address, email or telephone number to create your unique page.

“MyAlerts! provides a simple solution to what is a growing problem amongst an ageing population with multiple health complications,” continued Brodie, who believes that his years in showbiz took its toll on his body and resulted in his health complications.

His career began with long shifts at Pontins as ‘the world’s youngest hypnotist’ and eventually led to prime time television and a spot on the Bob’s Opportunity Knocks winner’s gala show, which was viewed by 22 million people, after which followed endless rounds of cabaret clubs, corporate product launches, cruises and conferences.

It’s not just people that can benefit from MyAlerts!, says Brodie, who lives in Pembrokeshire.

“While developing MyAlerts! I realised it could have other purposes as well,” he said.

“I live alone in a fairly remote location and have few visitors, especially during lockdown, and I was concerned about what would happen with my three rescue terriers if I had a medical problem while away from home.

“They would be locked in the house alone, and it would be days before someone would be alerted to the fact. So I added another function to the MyAlerts! page giving the contact details of a trusted friend who could come in and care for the dogs in my absence.”

Currently, more than 4.9 million people in the UK have diabetes alone and AGE UK recommends that people wear medical alert bracelets for a wide variety of conditions including:

MyAlerts! can be used in any situation where a first responder may need quick access to a patient’s medical history, including outdoor pursuits such as boating, cycling and rock climbing.