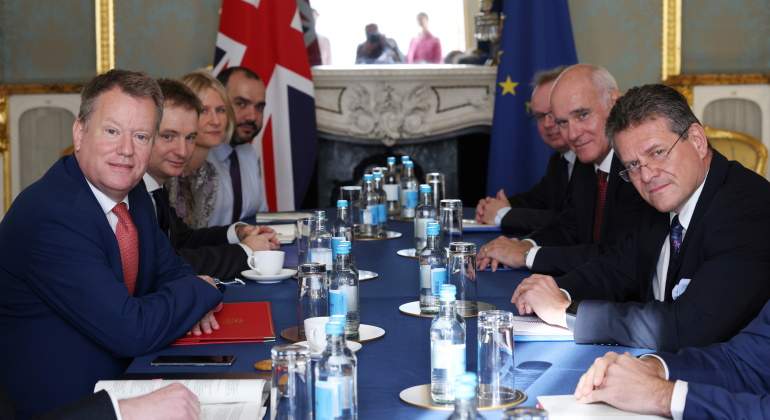 The vice-president of the European Commission responsible for relations with the United Kingdom, Maros Sefcovic, has warned this Friday of “serious consequences” if the British Government fulfills its threat to suspend the application of the protocol for Northern Ireland, while accusing London not to move from its starting positions despite the concessions offered by the EU to alleviate the open crisis.

In a statement without questions after meeting in Brussels with his British counterpart, David Frost, Sefcovic told the press that the European Union offered “significant” changes to try to find a solution without this also leading to concessions from the European Union. British side.

“The EU made a great move, but until today we have not seen any movement at all from the UK side,” said Sefcovic, who has defined this situation as “disappointing” and called “once again” the government of Boris. Johnson to get involved “honestly” in talks with the European bloc.

For three weeks, the negotiating teams of the EU and the United Kingdom have been meeting alternately in Brussels and London to seek “imaginative” solutions to the differences of opinion on the application of the protocol.

This agreement negotiated within the Brexit agreement obliges the United Kingdom to carry out controls on goods that cross from its province of Northern Ireland to Ireland, a Member State of the EU and, therefore, to the Single Market space. However, London complains about the practical complexity of the protocol and the financial damage to justify its failure to comply with it since January.

Meanwhile, the EU official said that his team spared no effort to offer alternatives with which to safeguard “stability and predictability” in Northern Ireland, for example by significantly reducing the number of controls and also by changing the EU’s own rules that are applied. They apply to medicines to avoid supply problems in the British region.

However, Sefcovic has said that the technical negotiations will continue and that he plans to travel to London to see Frost again in a week, on Friday 12 November, although he has insisted that it is essential “to focus all efforts on finding a solution as soon as possible. “

Serious consequences
For this reason, it has echoed the veiled threats that London has been making for weeks about the possible activation of the article of the protocol that would allow its suspension and has responded that taking such a step would have a very damaging impact.

“We hear a lot about article 16 at the moment but it must be clear that activating it to seek the renegotiation of the protocol would have serious consequences,” said Sefcovic.

The Community Vice-President has specifically referred to the risk of “instability and unpredictability” for citizens and companies in Northern Ireland, but also how it would affect “seriously” relations between the EU and the United Kingdom in general.

Resorting to the safeguard that allows one of the parties to suspend the protocol, Sefcovic pointed out, would mean “rejecting” the European efforts to find a consensual solution.

Drinking Tea May Improve Your Health