HomeNewsCEOE Defends That It Is Not The Time To Raise SMI

CEOE Defends That It Is Not The Time To Raise SMI 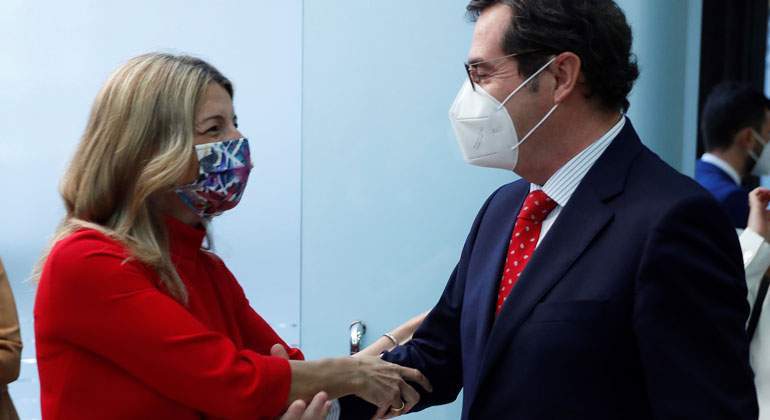 The Spanish Confederation of Business Organizations (CEOE) has reiterated this Friday that it does not consider that it is the time to raise the minimum interprofessional wage (SMI), after being summoned by the Government, together with unions and the employer Cepyme, to address this increase .

The Confederation of Antonio Garamendi relies on the fact that it is not the time to raise the SMI, as reported by Europa Press , taking refuge in the need to maintain employment and not endanger it with an increase in this legal minimum.

From the employer Cepyme match CEOE that ” it is not the time”, it is said to eE . Regarding the labor market, his position is that “it is necessary to avoid making decisions without studying the consequences, as has been done in recent years, since the negative impact on employment may be greater than the positive . “

They focus on the economic situation to avoid “that supposes a brake to the recovery.” Many companies have assumed many costs with a considerable deterioration in income and it has caused them a great attrition.

After leaving this salary floor frozen last January due to the economic difficulties caused by the crisis derived from the Covid-19 pandemic, the Government has resumed its will to raise it. The economic vice president, who stopped the first attempt to raise the SMI with the support of the President of the Government, Pedro Sánchez, has been paving the way during the month of August based on the “good” employment and affiliation data .

The Ministry of Labor and Social Economy, led by the second vice president, Yolanda Díaz, has summoned the unions (CCOO and UGT) and the employers (CEOE and Cepyme) to sit down to negotiate at the dialogue table on September 1.

Meanwhile, the employers recall the words of its president, Antonio Garamendi, who described the procedures for raising the SMI as “social dialogue in quotation marks” , arguing that it is a government faculty after consultation with social agents but, in Actually, it is a decision of the Executive.

Postures
Regarding a possible rise, the employers defend that it is not the time to address a rise in this phase of the economic recovery, and that in any case possible increases must be approved in accordance with the agreements reached at the dialogue tables open between companies and unions.

Likewise, in the CEOE they emphasize that a rise in the minimum wage does not impact in the same way in communities such as Madrid, Catalonia or the Basque Country, as in others such as Extremadura, where the cost of living is much lower.

In addition, they rely on the fact that the SMI has experienced a rise of 31.8% between 2018 and 2020, something unprecedented in the Spanish economy, and also there are still companies and businesses that have not recovered from the pandemic crisis.

Yolanda Díaz defends that in a scenario in which the salaries agreed in the agreement are rising between 1.5% and 1.8%, it is not acceptable that SMI recipients are losing purchasing power, because they are the ones who need the most help them. In addition, the latest inflation data stood at 2.9% , according to figures from the National Institute of Statistics (INE) for the month of July and the European Central Bank plans to end the year with data of 3% in prices.

The maintenance of purchasing power is precisely the minimum posed facing unions negotiating wage increases. However, this reference was limited to 0.9% when revaluing the pensions and salary of public workers at the beginning of the year.

Extended Warranties Are Awesome and Here Is Why You Need One

What is the ideal time for starting a Mains answer writing...

6 Reasons Why You Should Buy Eye Shadow Packaging Boxes