Pedro Sánchez has demanded that Pablo Casado support him in the serious diplomatic crisis unleashed with Morocco this week, by allowing the forces of the Alawite country the entry of thousands of people irregularly into Ceuta. The Prime Minister considers that the PP leader uses any “calamity” to try to “overthrow the Government of Spain. ” But they are not going to achieve it,” he continued. “It is not only unfair with the Government but it is with the general interest of Spaniards. Spain is suffering a challenge from a third country, which is Morocco, ” he told the Government in the control session.

Casado has reiterated that the Executive has the support of his party in this situation, but later he has regretted that what happened is “the chronicle of an announced crisis” due to the government’s diplomatic errors. He has cited the fact that Sánchez did not travel to Rabat on his first official trip after being reelected, as was tradition; not protest against Donald Trump’s decision , in December, to recognize Morocco’s authority over Western Sahara, and decide to host the leader of the Polisario FrontBrahim Gali with a false identity in a hospital in Logroño without informing that country.

That is why he has asked Sánchez to rectify while he has assured that “the chaos” of the Government is the greatest weakness of Spain abroad. “It has shown that the Government is too big for it. It has failed to manage the health crisis, the economic crisis, the territorial crisis, or the international crisis,” he added before assuring that there is more loyalty in the opposition than in the Minister council.

According to Sánchez, in the conversation they both had on the phone yesterday, Casado showed him his ” support “, a support that he has not seen, he pointed out, in Congress today or in public statements. The President of the Government considers that the PP is “using this calamity” , an “unprecedented crisis” with the neighboring country, as it did “with the pandemic.

Sánchez has asked him to stand” next to the Government “to defend territorial integrity and give “peace to the compatriots” of Ceuta and Melilla. “We want to know which side the opposition is on”,the president insisted before returning to focus on Morocco’s “challenge” and emphasizing that “Morocco’s lack of control” of migratory flows “is not a lack of respect for Spain but for the entire European Union.”

Ceuta has also been the protagonist of the face to face of Inés Arrimadas , president of Ciudadanos. The orange leader, with a very different tone from Casado, has asked him for information about this crisis. In his response, Sánchez has warned that this “is not a migratory crisis.” It is of another type and as such it is necessary to approach it, has indicated. At this point, he thanked the bodies and security forces for the work in the autonomous cities and had words of appreciation for the Minister of the Interior, Fernando Grande-Marlaska. 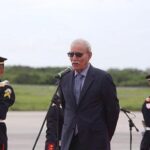