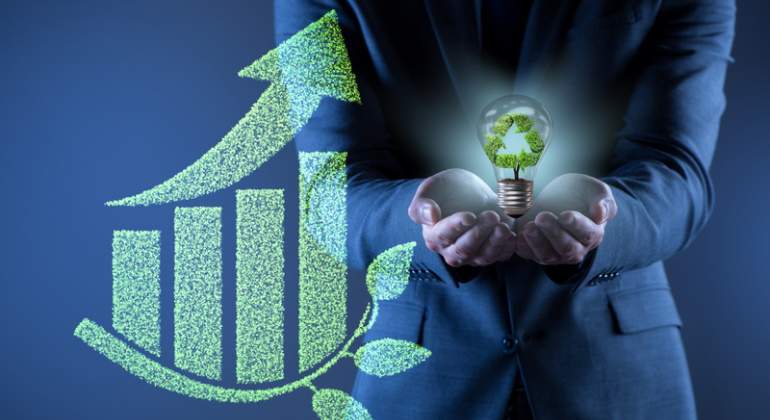 In the fishing grounds of the Spanish stock market there are different kinds of sustainable companies with regard to the environmental aspect of their businesses . From small fish by market size listed on BME Growth such as Kompuestos , Holaluz , Greenalia , Eidf , to green giants of the Ibex 35 such as Siemens Gamesa . And on the other side of the pond , Wallbox , specialized in the manufacture and sale of electric chargers, has just debuted on the New York parquet.

In most cases these are firms linked to clean energies and on the floor they are all designated with the green label, not all investors differentiate between the manufacturers of products that contribute to that gear, such as wind turbines or solar trackers , of electricity distributors or the builders and developers of parks.

Soltec is the third largest manufacturer of solar trackers in the world and the first in Latin America
According to the International Energy Agency , investment in renewables must triple to meet the commitment of the transition to net zero carbon proposed by 2050. And although these values ​​are not having a good year on the stock market, the commitment to The industry remains intact and will be boosted by the setting of new positions at the UN Climate Conference to be held from October 31 to November 12 in Edinburgh.

Now, which fish tank do these companies belong to?

Manufacturers: Siemens Gamesa
Wind turbines are key for onshore and offshore wind installations and those responsible for converting the kinetic energy of the wind into electrical energy . The mechanism is simple: the wind creates a rotating force as it passes through the blades, which rotate the axis from which they start, located in a part of the wind turbine called the nacelle. Siemens Gamesa hardly needs an introduction, since with a capitalization of 20,800 million euros, it was the fifth manufacturer by market share at the end of 2020. Despite the good prospects? A total of 84GW of new wind capacity is projected to be added across land and sea in 2021 ?? the company does not sign its best year on the stock market with losses of 33%. Still, from the 2019 lows, their stocks bounce around 12%.

Soltec
The Murcian firm manufactures and supplies solar trackers , basically, the device capable of orienting the panels so that they remain approximately perpendicular to the sun’s rays, following the sun from east to west. Soltec is the third manufacturer in the world and the first in Latin America, with annual sales of more than 3.6 GW in solar monitoring projects. With a market value of around 900 million euros, it will celebrate its first anniversary in the Continuo this Wednesday with rises of 44% since its debut. Of course, in what we have been exercising corrects 48%.

Kompuestos
The chemist directed by Ignacio Duch has developed a division of ecological plastics from biodegradable resins with which they are manufactured, for example, plastic bags to store fruit in supermarkets. It also carries out recycling and reuse processes for agricultural plastics that have been designed for the duration of the harvest, and once finished, it is integrated into the environment. Kompuesto, which capitalizes almost 30 million and little analyst following, receives the best purchase advice.

Wallbox
With an international presence in 80 countries, Wallbox is dedicated to the manufacture of electric chargers for the automotive sector. 17% of its sales are destined to public cargo, 6% to domestic cargo and 27% to office cargo. Its main clients include automobile companies such as BMW , Seat , Nissan or Hyundai and energy companies such as Endesa and Iberdrola . The company debuted on October 4 with the formula SPAC (Special Purpose Acquisition Company). Since then, 20% has been recorded until it exceeds 1,832 million of capitalization.

Distributors: Holaluz
The 100% green energy distributor jumped to BME Growth in November 2019 and is worth just over 236 million on the stock market. Holaluz is immersed in an acquisitions strategy in order to control the entire process. For this, it is buying installers that will allow it to create a hybrid structure of its own installers and agreements with local operators that ensure the scalability of operations. As of July 30, the company had 5,837 managed facilities, 211% more than in 2020, a total of 350,820 clients and it manages more than 1,200 MW on behalf of it.

Builders and developers: Acciona Energía
With a presence in 80 countries, the global leader in the promotion, construction, operation and maintenance of renewable facilities, has a wide background behind it and an ambitious investment plan with which it aspires to reach 20 GW by 2025 and up to 30 GW in 2030. Acciona Energía became the fourth world operator in long-term contracts (PPA) in 2020, with clients such as Telefónica, Amazon and Novartis. The firm has starred in the biggest premiere of the Spanish stock market in 2021 and since its jump to the stock market on July 1, it has revalued 12% and capitalized 9.9 billion euros, compared to 8.8 billion of the parent company.

Solaria
Its business model has evolved from the manufacture of photovoltaic cells and panels, a task it abandoned in 2014, to the development and management of generation plants in Spain, Portugal, Italy, Greece and Uruguay with the goal of reaching 6.2 GW in 2025 and has a pipeline of more than 10GW of potentially developable and distributed projects in Iberia. It was the first Spanish renewable to go public in 2007 and after a stratospheric 2020, it jumped to the Ibex in 2020. However, it is experiencing a turmoil in 2021 after collapsing 46.5% from the historical highs it conquered in January.

Grenergy
Independent energy producer through the development, financial structuring, construction, operation and maintenance of large-scale renewable energy plants. The pipeline of the firm led by David Ruiz de Andrés has climbed to 6.3 GW, increasing by 1.7GW in the last year. According to its latest accounts, it entered 82.5 million euros and achieved an ebitda of 13.3 million in this period. Since its jump in 2019, its share has soared by 700%, although since January it has lost 17%.

EiDF, focused on self-consumption facilities, is listed on BME Growth, where it bounces 340% in 2021
Audax
The former Fersa integrates the 100% renewable electricity and gas generation and commercialization businesses , although the core of its business is buying from wholesalers and selling to retailers. The company chaired by Francisco José Elías Navarro is present in 9 countries, manages 2,498 MW of renewable generation in different phases and has more than 515,000 clients. Its price experienced a 22% drop in the year.

Solarpack
According to the strategic plan that it presented in March, it will invest up to 2 billion euros between 2021 and 2026 to achieve an installed photovoltaic power of 4 GW, with 80% in Spain, Latin America, the United States and India. Solarpack is at an impasse after the government gave the green light to the EQT takeover for 881 million and will delist it from the stock market . It falls 8.6% in the year.

Ecoener
Directed by Luis de Valdivia Castro, it builds and operates hydroelectric plants, wind farms and photovoltaic plants. It has 141 MW in operation with 22% in several Central American countries, another 142 MW under construction and 1,527 MW in a portfolio with various phases of development and maturity. She was the only one who dared to step onto the floor after the cancellation of Capital Energy , the postponement of Opdenergy and two months before Acciona Energía. The Galician falls back from her debut by 9%.

Greenalia
The independent energy producer uses wind, sun, forest biomass and cuttings from certified plantations to generate and store electricity in harmony with nature, is listed on BME Growth and is preparing its jump to Continuous in 2022. Waiting for Unveil its strategic plan 2022-2026, scheduled for this semester, points to a target of 4.5 GW for 2030 and a future expansion to the US. With a capitalization of around 330 million , it loses 14% in the stock market in 2021.

EiDF
The group has so far focused on self-consumption facilities , but wants to develop large-scale production: it has a portfolio of 630 MW, with 420 MW in a mature stage and two main business lines: self-consumption, based on the projection and execution of photovoltaic installations for companies, and photovoltaic generation, consisting of the development of large-scale solar plants for the sale of energy to the grid. With a market value of 250 million, the firm led by Fernando Romero Martínez is out of the picture and bounces in the year more than 350% .

Things to do in Kedarnath

Things to Keep in Mind before Hiring Dedicated Developers