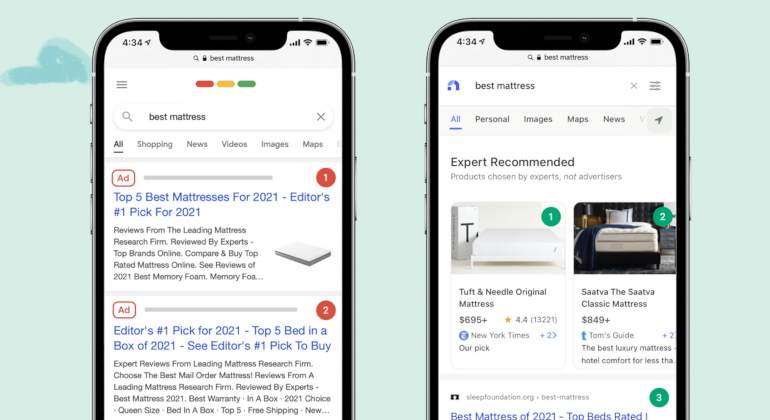 Neeva is a new Internet search engine, developed by former Google employees but with a completely opposite philosophy. Instead of being funded by ads, you have a paid subscription to deliver only real results.

It is thanks to the ads that Google has reached where it is, because it has been able to offer a high-quality service completely free of charge; But that doesn’t mean that users don’t have to make sacrifices. One of them is in your privacy, since Google ads work better the more data Google has on the audience.

Even usability is affected: if you have tried to do a search from your mobile, surely you have realized that the first results are not real , but paid ads; to that we must add the widgets and drawers that Google puts from time to time. To find the real results we have to scroll a lot, and depending on the device, even go to the second page.

Neeva was born as a direct response to these Google problems: at the fore are Sridhar Ramaswamy and Vivek Raghunathan, two former Google executives, and 30% of the workforce has been part of the Internet giant at some point. But Neeva’s concept is the complete opposite of Google’s, precisely because of that.

For starters, Neeva is a paid Internet search engine, costing $ 4.95 per month . That alone will already put many potential users back, but this income is necessary for the startup because they have agreed not to put advertising on their service, for two reasons: to improve the experience, and to protect the privacy of users.

Neeva has been released as an extension, compatible with major web browsers such as Edge, Brave, Safari, Firefox, and ironically Google Chrome. Once installed, it will not only redirect all searches to its platform, but it will also take care of blocking trackers that follow us on the Internet; not only those of Google, but also those of other companies specialized in online advertising. It also allows us to synchronize our mail, calendar and documents so that they appear in the search

This search engine also changes one of Google’s most controversial additions, product recommendations through Shopping. Although Neeva doesn’t delete them, she does bring them all together in one place, and promises to use only reputable sites.

It also does not eliminate the news boxes, but agrees to pay at least 20% of the income it generates to content creators, when a search does not generate a click to the content (that is, the results themselves have answered the question of the user and has not needed to enter the page).

Neeva’s creators present it as a “social experiment”, the answer to a question: if someone offers you a quality product, would you pay for it or would you prefer to have it free in exchange for ads?

The Top Benefits of Ayurvedic Treatment