HomeNewsThe Three Stones In The Road That Threaten Recovery

The Three Stones In The Road That Threaten Recovery 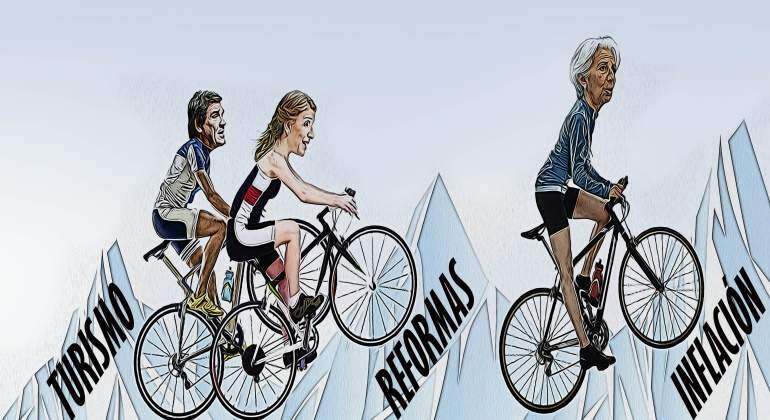 Sánchez has already prepared the roadmap for the next few years. The pardons to the prisoners of the procés will be the safe conduct to obtain the support of ERC to the Budgets . The Minister of Territorial Policy and Public Management, Miquel Iceta, will shortly convene the bilateral commission with Catalonia, which had not met for three years.

The goal, in Iceta’s words, is to try “eating things.” That is, investment in infrastructure and large chapters such as health or education, which received a great boost in the last year, thanks to the pandemic.

But it will not be easy. The new Minister of Economy, the pro-independence Jaume Giró , figures the fiscal deficit (the difference between what Catalonia contributes and what it receives from the State) at 17,000 million, denounces a slowdown in investment in infrastructure and announces the creation of a secretariat for the management of European funds, which protects the relationship that qualifies as “vassalage” towards the State.

The president of the Generalitat, Pere Aragonés , despite the vagaries with which his adviser started the legislature, will have to choose between confronting the State, as Giró wants, or meeting the needs of the citizens. Iceta relies on this last option.

Aragonés is interested in “doing real management”, he points out, although there are reasonable doubts that this is the case. In this regard, the Foment employers’ association, chaired by Josep Sánchez-Llibre, is doing a good job of fostering understanding.

The negotiation is complex. Several of the regional presidents met this week by elEconomista to analyze the Next Generation funds asked for “equity” in the distribution. The Galician president, Alberto Núñez Feijóo, recalled that with the resources to stop the pandemic or in the last game, on direct aid to SMEs, almost diametrically opposite criteria were followed, without explaining well why.

Iceta is optimistic because Spain will receive 19,000 million this year and next year more than 40,000 million are expected. Such a generous amount offers scope to be able to satisfy almost everyone a priori.

The public spending ceiling, which the Minister of Finance, María Jesús Montero, will present at the end of the month will pick up another important chute in the Budgets to satisfy the demands of the Catalans and other autonomous communities such as the Basque Country, the other protest partner Government.

With the 2022 Budgets in place, the Government hopes to be able to hold out until the end of 2023 or early 2024, that is, to practically exhaust the legislature. An essential time for the wound opened by the granting of pardons among public opinion outside Catalonia to heal.

Sánchez also presumes that the economy will close this quarter with a rise of 18%, and several institutions, such as the European Union, are beginning to review growth for this year , which will end above 6%.

But the path of roses can quickly turn into thorns. There are three latent risks that threaten to undermine the overflowing optimism of the Executive. The three concerns are the evolution of tourism between now and the end of the year, the approval of the labor and pension reform demanded by Brussels, and the increase in inflation, which could derail monetary policy. All three issues are currently at moderate risk of becoming reality. But I wouldn’t launch rockets into the air yet.

The increase in the incidence of the coronavirus, especially among young people, in France, Spain and Portugal, this week triggered the alarms in the tourism sector. France and Germany, two of the three main emitters of visitors for our country, together with the United Kingdom, discouraged their citizens from traveling to Spain.

The sector, which relied on an occupation above 60%, during the summer-autumn season, raised the alarm in search of more help. Banks like Goldman Sachs lowered their growth forecast after Brussels had made, as we have already pointed out, the opposite move, given the significant rebound in activity in the second quarter.

The slowdown on tourism, the lack of reforms requested by Brussels or inflation can bring down the economy

It is worrisome that the bottle or end-of-year parties ruin the reactivation. Prevention messages fail to penetrate young people. The end of the mask also raises fears of a relapse of infections. There are already voices like that of the Extremaduran president, Guillermo Fernández-Vara, who is also a forensic doctor, who advocate keeping it “in certain public spaces.” The evolution of this sector, which represents almost 20% of Spanish GDP between direct and indirect activities, is uncertain.

The second handicap is the reforms. The Executive catapulted spending since the outbreak of the pandemic to avoid a generalized impoverishment like that of 2008. The levels of debt, above 125% , and the public deficit, at 11%, are disturbing outside.

We were the country hardest hit by the coronavirus and it will cost us more than the rest, with an unemployment rate that triples the European average. That is why the 140,000 million Next Generation funds were approved. But they are not free.

The Government deceived us for months, as we denounced in this space and we have confirmed now. Brussels demands reforms for the delivery of funds in 2022. Above all, guarantee the future of pensions and remove rigidities in job creation.

The Minister of Social Security, José Luis Escrivá, agreed with the social agents the pension reform in two phases and left the cuts for later. Even so, with the exception of the two official parties (PSOE and Podemos), the rest of the parliamentary arch is against. Not even ERC or the PNV offer, at this time, their support for the bill, which should be approved this year.

In the workplace, things are even worse. The Vice President and Minister of Labor, Yolanda Díaz, advocates a counter-reform, which contravenes the demands of the European Union.

His plan would lead to an almost complete repeal of current legislation and a tightening of both hiring and firing. Naturally, he has already won the categorical rejection of the great employers, which is chaired by Garamendi. An agreement, as required in Brussels to disburse the funds, is very difficult before the end of the year, not even in partial aspects.

The third worrying point is inflation and its repercussions. In Spain it is close to 3%, while in Germany it has already exceeded that percentage. The persistent rise forced the president of the ECB, Christine Lagarde, to modify her objectives for the first time in more than 20 years, so that the 2% barrier can be overcome in a timely manner.

Here is the mother of all battles. Although there is broad consensus that this is a temporary phenomenon, because the underlying rate (excluding energy and raw products) is below 1%, there are factors that point to an upward trend in the medium term.

The main concern is energy prices. The disagreement this week between Arabia and the United Arab Emirates catapulted the oil barrel once again, while gas or electricity beat successive all-time records. The arrival of winter can exacerbate this trend.

Sky-high energy costs , together with those of raw materials, will be transferred to the production chain, causing a general increase in consumer prices in the medium term. At first, industries endure the pull, but end up giving in to cost pressures in order to survive.

If inflation continues, any change in monetary policy, no matter how small, would cause a financial and stock market earthquake . The costs of the debt, equivalent to a third of the Spanish budget, would be unaffordable.

They are those “stones in the road”, as the Minister of Transport, José Luis Ábalos would say, that at any moment can transform white swans into black swans, derail recovery and bury the horizon of political stability that Sánchez dreams of to complete the legislature.

Easter Fun For All The Family At Horwood House