HomeNewsSánchez Could Not Grant Pardon In France 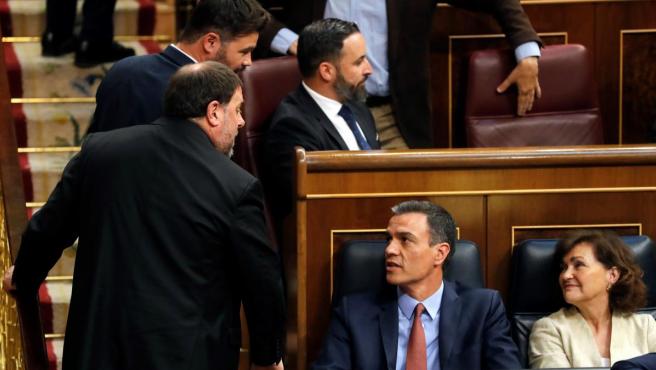 Sánchez could not grant pardon in France, in Italy Congress would vote for it and in the United Kingdom he should wait until 2029.

The figure of pardon exists in all neighboring countries , but not all states regulate it in the same way. In full debate on the possible granting of the grace measure to the pro-independence leaders condemned by the Catalan procés, it is enough to review the situation in neighboring countries to conclude that Pedro Sánchez could not pardon the prisoners in countries such as France, Italy or the Kingdom United.

Meanwhile, in Spain, the Executive is already working to grant a pardon to the independentistas condemned by the procés , and has been paving the way in recent weeks despite the ruling of the Supreme Court, contrary to the measure because it understands that they are not given the conditions of “justice, equity and repentance”, while Sánchez considers that it is a way of “leaving behind the tear” that according to him occurred with the illegal referendum of 1-O.

Faced with this, the opposition relies precisely on the words of the Supreme Court and will take to the streets on June 13 together with civil society to show its rejection of the measure. The leaders of PP, Vox and Ciudadanos will attend the concentration in the Madrid square of Colón because, they consider, Sánchez’s intention “erodes” Spanish democracy . Could it happen in other countries?

France has a process very similar to Spanish, where the last decision is political, but with nuances. In the French case, the President of the Republic is the one who decides, but it must be the convicted person who requests the pardon. In the Spanish case this has not happened and Spanish law does not require it: those convicted of the procés demand amnesty and the president of Òmnium Cultural, Jordi Cuixart, openly rejected the pardon.

In the French case, the judge in charge of the case sends an analysis of the case to the Minister of Justice, who can add “additional observations” , but ultimately the decision belongs to the Elysee. The most striking case in recent years was the pardon granted by Francois Hollande in 2016 to Jaqueline Sauvage, sentenced to 47 years in prison for killing her husband after suffering ill-treatment for decades.

Italy and two-thirds of the Chambers
Italy is a paradigmatic example. The granting of pardons is signed by the President of the Republic, but it is the legislative chambers that give them the green light ( Article 79 of the Constitution ). In order for them to be approved, they need the favorable vote of two thirds of the deputies in each one of them.

In that case, Sánchez would need the yes of 177 senators and 233 deputies. Subsequently, they are also approved by the Government and it is mandatory to consult the possibility of granting it with the minister of the portfolio or portfolios that are directly involved in the case.

In 2006, for example, Parliament ended up giving the go-ahead for the release of nearly 12,000 detainees, according to official estimates, with the aim of decongesting the country’s overcrowded prisons .

The pardon excludes crimes related to terrorism, organized crime, corruption of minors and violence or sexual exploitation, as well as the crime of usury and kidnapping for the purpose of robbery or extortion. In addition, the measure will be revoked whoever, in the five years after its application, commits a new crime that carries a penalty of more than two years in prison.

Traditionally, pardons in the UK have been massive in nature (to multiple people at once). One of the last was the one granted to 65,000 people who were convicted of being homosexual, accused of crimes contemplated in the laws of sexual offense, in a direct application of the so-called Turing Law , named in honor of the codebreaker of the Second War World Alan Turing. Homosexual acts were not decriminalized in England until 1967.

In Germany and Ireland the president decides
In Germany , for its part, the responsibility lies initially with the President of the Republic, as in France, but he can delegate the decision to both the Chancellor and the Minister of Justice . In addition, in the German federal states (Länder), prime ministers have the right to pardon in case the crimes are not of a political nature, such as treason. Whatever the situation, an exhaustive legal analysis is carried out on the reasons for the pardon and if it is pertinent, and it is possible to ask the Constitutional Court.

A very controversial case occurred in 2007, when then-President Horst Köhler denied pardon to the terrorist from the Red Army Fraction (RAF) organization, Christian Klar , whom he even visited in prison to see first-hand his situation and analyze requests for clemency. He had been sentenced to more than five life sentences in 1985.

Casado proposes to typify the illegal referendum and calls for “unity” around the PP to end a “terminal” Sánchez
Meanwhile, in Ireland the Constitution states that “the right to pardon and the power to commute or reduce a punishment imposed by a court that exercises its criminal jurisdiction, are attributes of the President “, who, as in Germany, can transfer them by law to other estates, such as the prime minister. There is no direct intervention by the courts, but the decision is not unilateral by the presidency, but must have the approval of the Government.

One of the most notorious cases in recent years occurred in December 1997, when the Irish Government approved the grace measure for nine prisoners of the terrorist group IRA as a “gesture of peace” in the middle of negotiations for the end of the conflict, which culminated with the Good Friday Accords, signed just one year later.

Drinking Tea May Improve Your Health

Testosterone: What Are The Low Levels And Symptoms?