HomeNewsPP Convention Appeals To Freedoms To Snatch La Moncloa From Sánchez And... 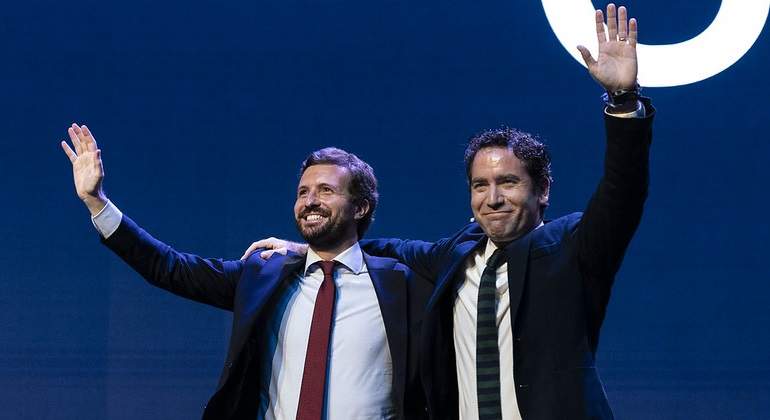 The Popular Party of Pablo Casado wants to raise the banner of freedom as the main electoral claim to seize the Government from the “radicals” of Pedro Sánchez and Podemos . This is extracted from the conclusions presented at the conclusion of the sixth day of the Popular Convention, in this case in Valencia.
“The vast majority of Spaniards are in the defense of freedoms,” summarized the Deputy Secretary for Communication, Pablo Montesinos, who was one of those in charge of presenting the conclusions of a Convention after a session that concluded late at night. Montesinos pointed out as a priority for the PP “the defense of constitutional Spain, concord and patriotism” as well as the autonomous state, “against nationalism and separatism.”

For this, he advocated “making the party bigger to reduce space to populism and nationalism” and in that line he mentions the return of Aleix Vidal Quadras or the support of the former head of Ciudadanos, Juan Carlos Girauta, for the Casado project.

Some arguments that also wielded hours before in his speech, the secretary general of the PP, Teodoro García Egea. The popular leader harshly criticized the current government for the rise in the electricity bill and energy in general, although he focused on highlighting the work of Pablo Casado to create a realistic alternative to the government by integrating a large center-right bloc.

“Three years ago we could not have held this convention, you have brought back the Popular Party,” said Casado’s right hand in training. García Egea stressed that while the left was delighted with “dividing the center-right into three parts,” the PP has demonstrated its management capacity with its alliances in different territories. Some “Governments of Liberty” that García Egea gave as an example and that “we formed only with those who respected our programmatic principles.” The politician added that “we have created a party that is the one that best represents the territory.”

The secretary general assured that this strategy has allowed the PP to go from being isolated to agreeing with more than 12 parties, and even occupying “a border space with the Socialists to pick up the Social Democrats disillusioned with Pedro Sánchez.”

Economy
The vice-secretary of Sectorial and head of Economy of the PP, Elvira Rodríguez, for her part recalled the commitment of the popular to the free market and private property “against” extreme regulation “of the left.

Among the economic conclusions, he highlighted that with “the highest structural deficit in Europe, the solution has not been raising taxes, but rather being more efficient in public spending.” Regarding fiscal policy, he stressed that “adapting the tax systems does not have to mean raising them” in the face of “reforms that are mostly counter-reforms” by the government of socialists and Podemos.

Education and Health
For her part, former minister Ana Pastor focused on measures related to Health Education. According to Pastor, the popular will defend an “education that does not indoctrinate” and “university excellence.”

He also set his priorities “an equitable health system”, which allows “a medical history that allows us to move around Spain without having to carry it across the country.”

Closing act
This Sunday the PP will close the convention with a massive act in the Plaza de Toros de Valencia in which, in addition to Casado himself, the Austrian Prime Minister, Sebastian Kurz, and that of Greece, Kyriakos Mitsotakis, will also be present, as a sign of the support of others European conservative parties to the Casado project.

What Persuades You To Explore the Best Tours of Harlem?