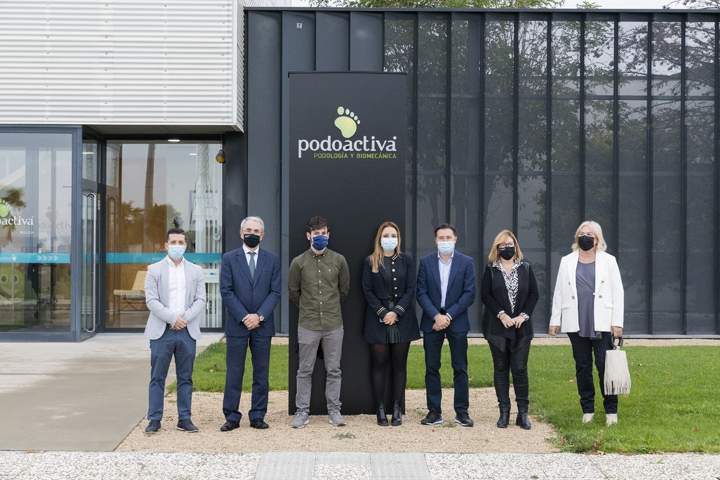 The Huesca company, specialized in podiatry and biomechanics, is promoting the project of its university center in which the Degree in Podiatry will be implemented together with the University of Zaragoza.

The impartation of this official title -the last administrative procedures are lacking- will help to alleviate the shortage of training offer in this field, being expected that it will not only have an impact on the Aragonese community, but also on other nearby autonomous communities.

To advance its implementation, a meeting took place today at the Podoactiva headquarters, in the Walqa Technology Park, between representatives of the company, the Minister of Science, University and the Knowledge Society of the Government of Aragon; José Ángel Castellanos, vice-rector for Academic Policy, and Marta Liesa, vice-rector of Campus Huesca, both from the University of Zaragoza.

The day began with a guided tour by Víctor Alfaro, general manager of Podoactiva, through the company’s facilities that will house the practical contents of the “Podoactiva Podiatry University Center”.

The theoretical regulated knowledge of the Degree will be taught at the Podoactiva Foundation facilities located within the Walqa Park itself, in the Félix de Azara Building. Maru Díaz, José Ángel Castellanos and Marta Liesa have also visited other Podoactiva infrastructures, which has the largest laboratories in Europe focused on research and treatment in podiatry.

In this act, Maru Díaz, has opted to continue specializing the Huesca campus in the area of ​​health and sports, so that it continues to exercise “that essential function of structuring our territory, establishing population and training our next generations.” In this sense, the new degree in Podiatry will alleviate, as he has said, a shortage of specialized training offerings and will be a “tractor” for students from other neighboring communities.

In addition, it will allow “anticipating the needs of the health system in the future”, given that the need to integrate podiatry in public health is shared, added Maru Díaz, who also highlighted the experience of research collaboration between Podoactiva and the University de Zaragoza, which guarantees the quality of the degree and its impact through teaching, research and health application.

For his part, José Ángel Castellanos explained that “we are very happy to bet on all the university campuses. Projects like this create added value and future for Aragonese society”.

Finally, Víctor Alfaro has highlighted that “promoting the degree is a firm commitment that we make from Podoactiva for our city, Huesca, and for Aragon, implementing university studies in the Walqa Technology Park that we intend to become benchmarks at a national and international level “.

Alfaro has valued that “doing it hand in hand with the University of Zaragoza is a great satisfaction since it is an institution of great prestige with which we have been working on different research projects for many years”, while he wanted to “thank the rector of the University of Zaragoza and all his team their great predisposition and all their support to make this project a reality. The main objective is to train great professionals who have the experience of experts with a long career, the latest technology in the world of podiatry and biomechanics, and the best facilities to learn “.

The degree in Podiatry is not the only training activity promoted by Podoactiva. About a year ago the company launched WAPS (World Academy of Podiatric Science), the first specialized training platform in podiatry and biomechanics, with different own master’s degrees for graduates, courses, master classes and other educational content, taught in a 100 environment % digital and through microlearning.

An Unforeseen Method to Utilize Rubicks Cubes in Sydney in The...