HomeNewsMythical Party & Co. Celebrates Its 30th Anniversary At The Hands Of...

Mythical Party & Co. Celebrates Its 30th Anniversary At The Hands Of Edu Soto 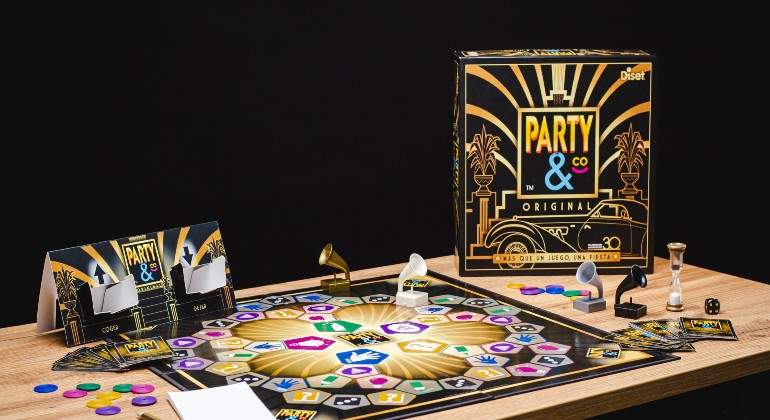 Party & Co. celebrates 30 years and it does so by rewarding its most loyal followers, the various generations who have shared fun after-dinner parties enjoying the mythical game with family and friends.

To celebrate the anniversary, the company has organized the Party & Co. Spanish Championship, which consists of a first phase through its Instagram account and a second face-to-face phase, which will be attended by comedians Edu Soto and Luis Piedrahita and that will take place on November 20 at the CC. La Vaguada in Madrid, to celebrate the semi-final and grand finale of Party & Co.

30 years of experience
The first Party & Co. was born in Spain, developed by the creative team of the toy manufacturer Diset. “At the beginning of the 80s, very successful games such as Trivial Pursuit or Pictionary appeared on the market, in which we were inspired to create a game that brought together different categories in the same box and that, in addition, was fun and suitable for all kinds of players “, says Joan Ferrer, CEO of Diset.

From that inspiration, Party & Co. was born in Barcelona in 1991, the authentic and original multi-tasting game that at the time of its launch was a pioneer in the market. “We call it Party &

Co. because more than a game it is a party where everyone can play with no limit of players “, adds Joan Ferrer.

The first design of which today is the Party & Co Original, is set in Art Deco because it was a time that invited parties and also its aesthetic was elegant and appropriate to the purpose of the game. Today, the current design maintains the aesthetic bases but updated, 30 years later.

More than eight million units sold
Over the years Party & Co. has become a classic game that has been incorporating new versions. “Precisely, after 12 years of creating the first Party & Co., we realized that we had to give it a generational leap. We decided to rent a hotel room that we turned into a development room where five of our creatives had the mission of create the Party & Co. of the 21st century After several intense and unforgettable days we came up with a draft of the ideas that the game needed to ensure its continuity and the success of the whole Party & Co. family. We call this new version Party & Co. Extreme. ” Comments Cristina Sánchez, Marketing Director of Diset.

Part of the company’s success is due to the fact that it has a game for each age segment, theme and group of players. Currently seven different versions are available in Spain: Original, Extreme, Junior, Disney, Disney Princesses, Family and Ultimate. In addition, around eight million units have been sold worldwide, with Spain being the first market, the country where the game was created. Last year 150,000 units were sold in Spain. Benelux is the second market where the Party & Co brand is well positioned and Germany the third.

A very special anniversary
To celebrate its 30 years, Party & Co. celebrates a grand final of its Spanish Championship, which will be in person and will take place on November 20 at the CC La Vaguada in Madrid, under the watchful eye of Edu Soto and Luis Piedrahita, which will also participate and play two semifinals and a grand final.

All participants will enjoy a unique morning full of good vibes and excitement. In addition, the winner will take a trip to New York for four people.

How, Why, and When You Should Clean Your Solar Panels