HomeNewsMetal Businessmen And Unions Warn Of The Lack Of Supply Of Raw... 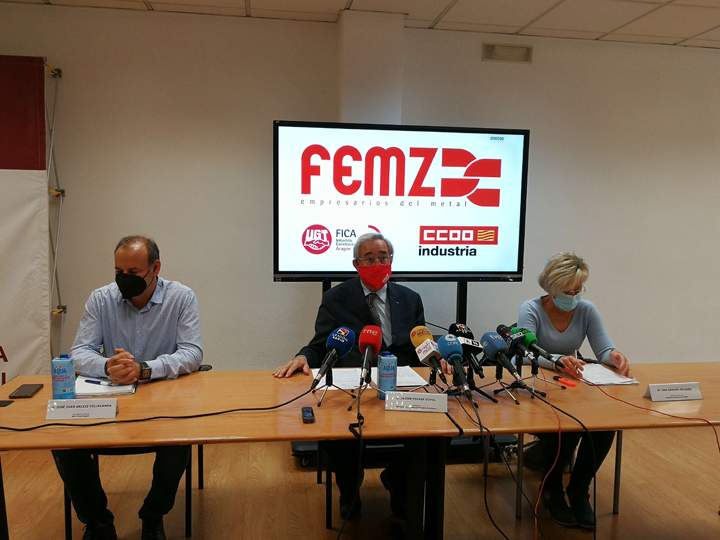 The Zaragoza Metal Entrepreneurs Federation (FEMZ), Aragon Industry Workers Commissions (CCOO Industria de Aragón) and the Federation of Industry, Construction and Agro of the General Union of Aragon Workers (UGT-FICA Aragón) have warned of the situation in the metal sector as a result of the shortage of raw materials and components, as well as the increase in the price of energy. A situation that worries the three organizations due to the serious difficulties that the industry is having to face.

The lack of supplies, both of raw materials and components, which has been affecting since the beginning of the year continues to cause serious problems in the cost structure and organization of companies. In addition, delivery times are being difficult to manage, transport costs are multiplying and even in some cases, there are no guarantees of delivery date.

For example, since the beginning of 2021, the price of aluminum has increased by 52.8%, stainless steel by 30% or wood by 450%, while the price of the container from China has increased by 614% compared to 2020. Added to this is the rise in gas and electricity prices, which are growing week by week, and which for companies are unaffordable as their profitability and margins are reduced.

The sector forecasts very tough months and ensures that this rise in costs will have an impact on product prices and, as a consequence, will condition the recovery of the economy.

“A year ago the megawatt cost 35 euros and now 240 euros. If the cost of energy accounted for a third of the price of the final product for some companies, now it has risen to 50%”, said Javier Ferrer, president of the FEMZ, who has put on the table several proposals for solutions such as “promoting renewable energy in industrial estates to avoid energy dependence on the outside. How many industrial estates in Aragon are half empty? Why not use part of these to install solar panels or wind turbines? “.

In the opinion of Ana Sánchez, secretary general of CCOO Industria de Aragón, “there has been a clear industrial neglect in our country and this has caused that, for example, in Spain there are only two or three companies that are dedicated to the manufacture of microchips “.

This whole situation is causing intermittent stops, and even ERTEs, which extend to the entire supply chain. “With this scenario, a regulatory framework is necessary that includes the possibility of availing itself of ERTEs for a major cause”, Javier Ferrer pointed out. “As long as there is no definitive solution, that is, promoting industrialization, it is necessary to use protection mechanisms that prevent ERTEs from becoming EREs, as has been done during the pandemic,” Ana Sánchez agreed.

“The auxiliary industry is going to be the real harmed because manufacturers are adapting their production to the product that has the most profitability,” said José Juan Arcéiz, general secretary of UGT-FICA Aragón, who has stressed that “in Aragon we have a great a locomotive that generates a lot of jobs and is having problems, but this locomotive is pulling a lot of hitched wagons that are going to have a very bad time “.

The unions have reiterated the need to modify the marginalist method of calculating the price of energy. “A new design of the energy mix is ​​needed. We cannot be paying at the price of the last energy to enter the auction and the most expensive,” said Ana Sánchez. “We are going to pay for the broken dishes in duplicate: on the one hand, as a consequence of the ERTEs that companies are beginning to consider and, on the other, as their own consumers in our homes. The solution must come from Europe”, Arcéiz stressed.

Both the business organization and the unions have also warned of other problems in the sector such as the lack of manpower and the need to promote quality Vocational Training that responds to the real needs of the business fabric. “The Metal sector has good collective agreements and good working conditions. It is important to restore the connection between young people and the sector’s employment needs,” said José Juan Arcéiz.

What are the advantages of eating nutritious foods?

Will Inflation Persist, The Odds Are Slim, Although The Effects Would...