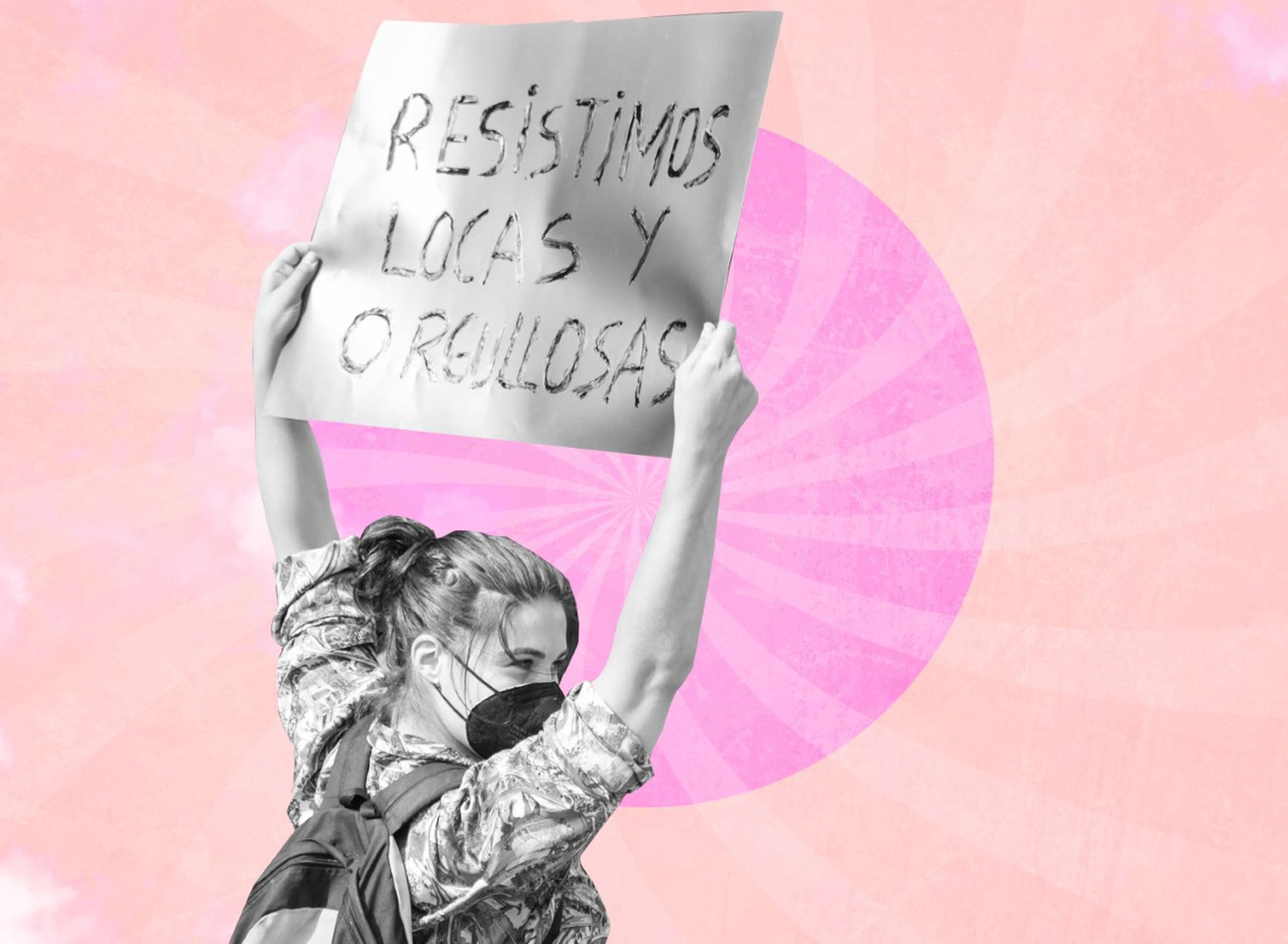 Ibai Llanos launched an appeal through his networks. “Always take care of your mental health . Ask for help from the people around you and go to a professional. I know that sometimes it is difficult or embarrassing to seek help and tell about problems, but there are times when it is absolutely necessary ”.

Around the same time, the national political debate centered on the United We Can mental health bill , in which the main objectives of ending the stigma surrounding these diseases and guaranteeing their public attention are set. A few days earlier, on May 29, thousands of people across the country took to the streets to celebrateCrazy Pride , claiming the right to mental health and denouncing the systematic violation of the rights of psychiatrized people.

This popular and media outbreak is not accidental. Since the start of the pandemic, concern about mental health problems has grown in intensity.

The data on the increase in this type of pathology, especially among the youngest – pediatric emergencies for psychiatric consultations have grown by 50% in the last year – have exposed the deficiencies of the public care system: Spain has only six psychologists per 100,000 inhabitants, although there are areas such as Galicia or Andalusia where this figure is even lower.

The gravity of these data has made the political debate focus precisely on the urgency of increasing resources, improving mental health services and normalizing disorders such as depression or anxiety. But what does it mean to normalize these problems? Is it enough to increase the ratios of professionals in psychology and psychiatryto achieve a healthier society?

Many of the popular demands that have been made for years from associations, support groups and activist groups demand that, in addition to increasing resources and destigmatizing all mental illnesses, the psychiatric model that predominates in public and private institutions be also questioned; that the social determinants of mental health be addressed more actively; to put an end to the violation of the rights of psychiatrized people and to deploy a strong system of social and labor protection for those diagnosed.

Questioning the biomedical gaze
“If you see that everyone is locked up at home, with an economic crisis plus covid , with a lot of uncertainty, and people start to develop eating problems or anxiety, it is not because everyone has suddenly failed in brain; what has failed has been the system ”. Fátima Massoud, an activist from Orgullo Loco Madrid , explains with this example the importance of broadening the view on mental health a little.

Massoud recalls that already last year, “on International Mental Health Day, the WHO recommended allocating more resources. It is the hegemonic discourse: resources are lacking. And it is true that in the Spanish State very little money is spent [according to data published in EL PAÍS, only 5.5% of health spending] but the problem is not only the resources, but the need for a change of model and paradigm, in which an attempt is made to see mental health problems and mental suffering from a perspective that is not so biomedical and in which it is not human rights are violated ”.

In the manifestthat they published for the announcement of Crazy Pride Day, emphasized the need to question psychiatric practices that, according to them, contribute to the chronification of disorders and the medicalization of suffering.

“We claim that mental health is a political priority, because the consequences of material conditions, the product of a capitalist system, become pathologized, and thus work stress is medicated instead of improving working conditions”, states the manifesto. Relying on the reports of the UN Special Rapporteur, they claim that mental health crises such as the one we have now are not managed from a pathological perspective, as individual disorders, “but as a crisis of social obstacles that prevent the exercise of rights individual ”.

Massoud explains that under the biomedical model, psychiatric treatments often end with the administration of drugs to chemically balance the patient, without attending to the social and economic reality that may be at the origin of their discomfort.

“Anxiety has a lot to do with the stress of the life we ​​lead, that you don’t know what will become of you tomorrow, you don’t know if they will kick you out of work, you can’t afford a flat in a big city. The problem with the medication is that it is a patch.

Sometimes it is necessary: ​​an anxiolytic can be useful at a certain moment, for example, because you have not slept for days; the problem is that they get used to you and tell you that you always have to fall asleep with benzodiazepines, a drug that in Spain is widely prescribed in primary care. ”

Fran Calvo, doctor in psychology and professor at the University of Girona , who has specialized in the prevention of mental health problems for people at risk of extreme social exclusion , expresses himself in this same sense .

It highlights that despite the fact that, officially, the institutions work with a model that they call biopsychosocial,in practice “there are few coordinators or directors of mental health services who come from the social sphere, most of them are psychologists or psychiatrists”.

For Calvo, this makes “certain behaviors reactive to a social situation become pathologized. For example, it can be described that a person is having a stressful reaction to a migratory movement, and is afraid of what may happen, of uncertainty, or it can be said that it is an adjustment disorder and benzodiazepines are prescribed to sleep ”.

Machismo and racism in diagnoses
The activist work of groups like Orgullo Loco focuses on denouncing some of the daily practices in the current psychiatric system: involuntary admissions, mechanical restraints, forced medication or prolonged isolation.

For Massoud, this is the main challenge for the present and future of mental health in our country: “That human rights be respected in mental health facilities, and also in private psychiatric hospitals and long-stay centers and in everything that is mental health centers.

The UN rapporteur did a study and considered it torture, not that we say so. It is a question of human rights, European law and constitutional rights ”. This situation has also been aggravated by the pandemic. Crazy Pride has enabled a website to collect and disseminate testimonies of this type of psychiatric violence, where forms of coercion and punishment that occurred during the pandemic are narrated, such as denying inmates access to their economic resources or depriving smokers of tobacco.

Massoud points to other problems associated with this model of detention, which, for them, have to do with patriarchal and racist biases. “Psychiatry has always served as a tool for controlling women. In income it is noticeable that anger and aggressiveness are penalized more: a woman with the same aggressiveness as a man is tied before, violence is exercised before, because it is considered that women should be submissive and serene ” .

He continues: “In borderline personality disorder, which is often diagnosed because the symptoms are very similar to those of a woman who has received sexist violence, the mistreatment was disguised by suggesting that it was the woman who was ill.” The psychiatrization of migrants is also one of the main points of complaint, especially in relation to internments in CIE and juvenile centers.

In this regard, Fran Calvo points out that it does not make sense to diagnose the majority of inmates with an adjustment disorder, when the causes of their discomfort must be found in material conditions: “It is a way of doing that responds to the inability to intervene in a more preventive, more social way, providing resources, increasing the social protection system, giving more job opportunities for development ”.

Calvo, who has published various academic studies on the mental health of homeless migrants , points out that difficulties in accessing the public health system are decisive. Since the 2008 crisis there have been variations in the legislation, but in most cases “the migrant population was only treated as an emergency.

Psychiatric emergencies are activated when a person is decompensated and is a danger to himself or others. If you are about to commit suicide, you will be treated; if he’s having a psychotic break, they take him away and make up for it; but then you can’t go any further ”.

Calvo points out that one of the main challenges for the future is to “try to reduce hospital admissions for people with serious mental disorders”, and to do so through community intervention models that also take into account the processes of social and labor reintegration.

Although he distrusts the concept of “normalizing”, he does point out that the silencing and stigma that weigh on mental health continues to be one of the main obstacles to overcome. “When a person has type 2 diabetes, for example, acquired by bad habits, sedentary lifestyle or a poor diet, the judgment made by the general population is not particularly significant.”

The teacher compares it with the stigma that weighs on someone who suffers from alcoholism or heroin addiction: “Many pathologies related to mental health have to do with difficulties in adapting to a hostile environment, including also substance use disorders, which are also mental illnesses. Guilt weighs on these people for not having been able to resist the pressures of the hostile environment; and this part of the esteem is very important, because the person is held responsible for their illness, something that does not happen with other pathologies ”.

From Fiction To Reality, Companies Rub Their Hands With Dream Incubation