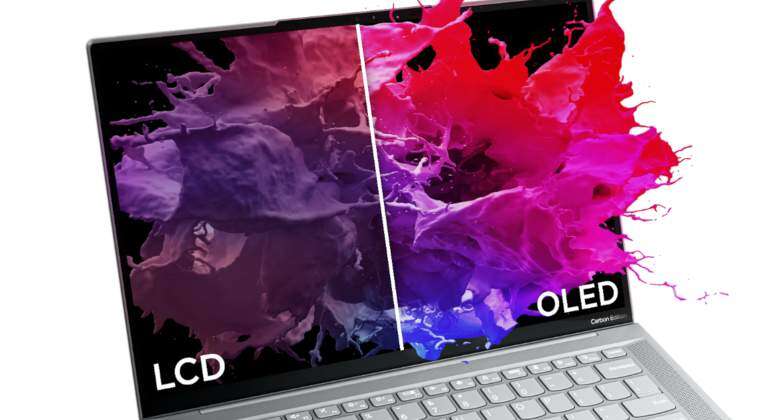 Lenovo’s new laptops are lighter than ever, with major new features like OLED displays and Windows 11 support.

The star of the range is the new Lenovo Yoga Slim 7 Carbon, which the company presents as the lightest 14-inch OLED laptop in the world, weighing only 1.1 kg. The key is in the name: “Carbon” refers to its carbon fiber and magnesium alloy chassis , which is what has allowed it to achieve such low weight, even in such a complete model. It’s tough too, as evidenced by its MIL-STD 810H military certificate, which means it has passed nine tests under tough conditions.

OLED displays have finally started the conquest of laptops, as Asus ‘ new OLED laptops demonstrated , and now Lenovo uses this technology in the new Yoga Slim. Specifically, the chosen panel has been manufactured by Samsung Display, with reduced edges to offer the greatest amount of space in the small size of the laptop. The resolution is QHD +, and it is important to emphasize that the aspect ratio is 16:10, so it is a little higher than usual; that’s better for working with documents or browsing the web, since we don’t have to scroll as much.

Image quality is guaranteed, thanks to a factory calibration to Delta E <2 covering 100% of the DCI-P3 color gamut. So the colors will be vivid and faithful, and the contrast promises to be good too, with a brightness of 400 nits (and peaks of 600 nits), earning it VESA DisplayHDR TrueBlack 500 certified . The refresh rate stays at 90 Hz and it has a blue light shield. Although by default it is a glass screen, we can opt for a touch panel with Gorilla Glass.

As for the internal hardware, Lenovo has opted for AMD and its Ryzen 7 5800U , which include an integrated Radeon graphics; although we can opt for a dedicated graphics, an Nvidia GeForce MX450. It comes with up to 16 GB of LPDDR4x memory and up to 1 TB of internal storage, with a 61 Whr battery and double charger, which allows you to achieve up to 3 hours of use with a charge of just 15 minutes.

The Yoga Slim 7 Carbon will be one of the laptops that will launch the new Windows 11 operating system and therefore, it brings all its news and functions, including Windows Hello to use the infrared camera to identify us. It will be available from October at a starting price of $ 1,289.99 (to be confirmed in Europe). This and all other Lenovo laptops are compatible with Lenovo’s Project Unity , the software that allows you to connect a tablet and use it as a second screen.

The second model announced is the Yoga Slim 7 Pro , with a large 16-inch screen based on IPS technology; it also has a 16:10 aspect ratio and a maximum brightness of 500 nits. Interestingly, it surpasses its older brother in the display frequency, which reaches 120 Hz, but not in color, since it only covers 100% of the sRGB color gamut, although it is DisplayHDR 400 certified.

It also uses an AMD processor, although in this case it is the Ryzen 7 5800H, and it comes with a dedicated graphics card, the RTX 3050 with which it will be possible to play some titles. You can mount up to 16GB of DDR4 RAM and up to 1TB of M.2 SSD storage, with a 75 Whr battery. It will be available from October for $ 1,449 (to be confirmed in Europe).

Lastly, Lenovo has introduced a new Chromebook, the IdeaPad Duet 5 Chromebook . The striking thing about this system is that it is a two-in-one: we can use it as a tablet simply by separating the keyboard, making it more similar to an Android tablet with a keyboard cover. The big difference is its ChromeOS operating system, which also allows you to run Android applications.

The 13.3-inch screen is OLED, and covers 100% of the DCI-P3 color gamut, with superior brightness and contrast than LCD screens. With the 42 Whr battery Lenovo promises up to 15 hours of battery life, browsing or studying. The processor is a Snapdragon 7c with up to 8GB of LPDDR4x memory and up to 256GB of eMMC storage. It will be available from October for $ 429.99 (to be confirmed in Europe).

Reasons Why You Should Hire a Digital Marketing Agency in 2022