HomeNewsAmartya Sen, The Economist Who Worked The Most To Eradicate Poverty

Amartya Sen, The Economist Who Worked The Most To Eradicate Poverty 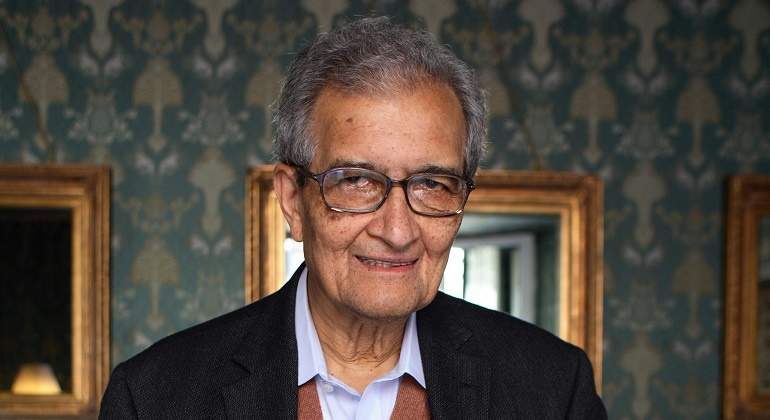 The UN based the Human Development Index on the works of this Indian professor, recognized with the Nobel Prize and who now receives the Princess of Asturias Award in 2021. His interest in injustices came from reading John Rawls, Hilary Putnam and Kenneth Arrow. In his career, his knowledge of the political and social reality of his country of origin also stands out: “India has a long history of pluralism that is under threat,” Sen warns.

Amartya Sen tells in his memoir, which he has titled A home in the world -published this year by Taurus-, that at the age of 12 he told his grandfather that he did not want to regularly attend assemblies in the mandir , the name given to the Hindu temples, where man preached before the faithful. To his surprise, the grandfather did not reprimand him, but replied: “There is no reason to have religious convictions until you are able to think seriously for yourself. It will come naturally in time.”

And although that religious awakening did not come, the anecdote is a reflection of the character that little Amartya already showed then, who in 1998 was recognized with the Nobel Prize in Economics “for his contributions to welfare economics and the theory of social choice. and for his interest in the problems of the poorest members of society “, collects the Encyclopaedia Britannica .

“His entire intellectual career has contributed in a profound and effective way to promoting justice, freedom and democracy”, reads the minutes of the jury of the Princess of Asturias Foundation

Sen was born in November 1933 in Santiniketan (West Bengal), in the territory of the British Raj, about 100 miles from Calcutta. “I was born on a university campus and it seems that I have lived my whole life on one campus or another,” began the biographical essay he wrote for the Nobel Foundation.

In the story, he talks about his father, Ashutosh Sen, a chemistry teacher at the University of Dhaka (Bangladesh); from his maternal grandfather, Kshiti Mohan Sen, professor of Sanskrit and Indian culture at Visva-Bharati University – the school founded by the philosopher and poet Rabindranath Tagore in Santiniketan – where both Amartya, as a child, and his mother, Amita Sen, studied . Of the Tagore school, he notes that “the emphasis was on fostering curiosity rather than competitive excellence, and any interest in test results and grades was discouraged.”

Years passed and the first university stage arrived in Calcutta, at the beginning of the fifties; This was followed by his stay at Trinity College of the University of Cambridge (United Kingdom), where he obtained a degree, a master’s degree and a doctorate. Later, he taught at leading centers such as the University of Delhi, the London School of Economics, Oxford and Harvard.

“India has a long history of pluralism that is now under threat,” the economist confessed to the Financial Times .

But if something marked his future trajectory, it was the memory of the Bengal famine of 1943, in which between two and three million people perished, and which he witnessed when he was ten years old. “I was struck by its totally class character,” said the Nobel Prize winner. “I did not know anyone at my school or among my friends and relatives whose family had the slightest problem during the entire famine; it was not a famine that affected even the lower middle classes, just people much lower on the scale. economic, like landless rural workers, “Sen wrote.

Understanding poverty and contributing to its eradication have been the beacons of his academic life. “His entire intellectual career has contributed in a profound and effective way to promoting justice, freedom and democracy”, reads the minutes of the jury of the Princess of Asturias Foundation, which awarded him, this October 22, in Oviedo, the Prize of Social Sciences 2021 .

The United Nations has published the Human Development Index for thirty years, which is largely based on the work of Amartya Sen. An index that replaces “characteristics of property, means and possession of income, by characteristics that have to do with human life and the freedom of people to live the kind of life that they value according to their own reasoning,” Sen explained in an interview. with BBC Mundo in 2010.

The Indian economist told The Harvard Gazette this summer that his interest in social injustices came after reading John Rawls, Hilary Putnam and Kenneth Arrow. In fact, he describes the work Social Election and Individual Values , by the latter, as a “transformative” reading, which he read when he was 17 years old.

Now 87, he has no intention of retiring and still has projects to explore . “There are a number of problems that I would love to do. Some of them are things that would make a little more difference in the world,” he tells the Harvard newspaper. “For example, we can go from poverty to security and see what help we get from social choice theory.”

Although his mind is still at full capacity, the body begins to fail – the Nobel prizes are also made of flesh and blood. Sen has had one knee replaced and the other suffers ramps due to poor circulation. In 2018, he underwent radiation for prostate cancer. At least “I haven’t lost any teeth,” I told Edward Luce of the Financial Times in July .

His other great passion: India
In addition to social and family inequalities – he has four children and is married for the third time to Emma Rothschild, a professor at Harvard – Amartya Sen’s other great passion is his country of birth. “India has a long history of pluralism that is now under threat,” the economist confessed to the Financial Times .

According to the British newspaper, Sen resigned as rector of Nalanda University in 2015, after President Narendra Modi’s party (BJP) came to power and blocked funding for a university that [Modi] suspected was anti-Hindu.

“People are afraid now. I have never seen this,” Sen told The New Yorker in 2019, in an article titled Amartya Sen’s hopes and fears for Indian democracy , referring to some of the practices carried out by the current Indian government. “When someone says something critical of the government when talking to me on the phone, they say: ‘I’d better tell you when I see you because I’m sure they’re listening to this conversation.’

Testosterone: What Are The Low Levels And Symptoms?