At the age of 27, Johnny Boufarhat has become the youngest billionaire in the United Kingdom thanks to Hopin , a company in charge of organizing online events of which he is CEO and founder and which is valued at more than 4.6 billion euros.

Boufarhat, with a net worth of just over € 1.6 billion according to the Sunday Times Rich List , is a digital nomad who moves from one rental property to another and runs his business from wherever he may be. “Being a completely remote company allows us to do things that others have not been able to do before,” he explains from Barcelona, ​​where he lives for rent.

The idea of ​​founding Hopin, of which he owns 35%, came after Boufarhat caught a virus on a trip to Southeast Asia in 2015 that left him immunosuppressed, as he told the BBC . “It made me a different person,” he recalls. At the time he did not know that a global disease, such as Covid-19, would be the one that would lead to the massive acceptance and success of his company.

Hopin began its journey in 2019 with just six employees, and thanks to the pandemic it grew to 500. Like Zoom or Slack, this online events organization company hit the mark by being in the right time and technology space, Lockdowns meant the suspension of the conference industry.

To date, Hopin has held over 80,000 events
In the first weeks of the pandemic, the platform added more than five million users, and to date it has held nearly more than 80,000 events, working with organizations and companies such as the United Nations, NATO, Slack and Unilever.

Once a month, Boufarhat gathers his 500 employees from 45 countries in his ‘conference room’, a trend that will not change after the pandemic. “Remote work has allowed us to hire a pool of talents from around the world, something that is necessary when you are growing so fast.”

It also conducts a monthly survey with its workers in order to see which areas of the company need improvement. In addition, he randomly matches a meeting between two employees for an ‘online coffee’, in an attempt to replace those moments of rest in the office. 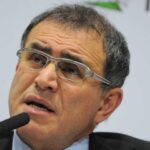